All National Open University Of Nigeria (NOUN) Students from 100 level to 200 level and those that had carryover courses respectively are to note that the directorate of examination has released the draft e-examinations timetable for the 2022 first semester.

Are you preparing to write the National Open University Of Nigeria (NOUN) 2022 first semester e-exam? Then this page is for you.

Also note that, this is a draft schedule, not a final schedule. Last but not least (Edited will be released by the school later on).

The NOUN 2022 E-exam update as seen by Mediangr NOUN Portal Admins on the e-Exam Draft Timetable, confirm that NOUN E-Exam starts on Tuesday, 24th May 2022.

The National Open University of Nigeria is a Federal Open and Distance Learning (ODL) institution, the first of its kind in the West African sub-region. It is Nigeria’s largest tertiary institution in terms of student number and is popularly referred to as NOUN.

Check out the current NOUN Timetable For 2022_1 e-exam timetable, recently released by the management of National Open University Of Nigeria.

Students are by this notice advised to download the timetable and get prepared for the forthcoming examination.

If there is changes on NOUN Timetable For 2022 e-exam timetable First Semester, Mediangr Team will definitely let you know. 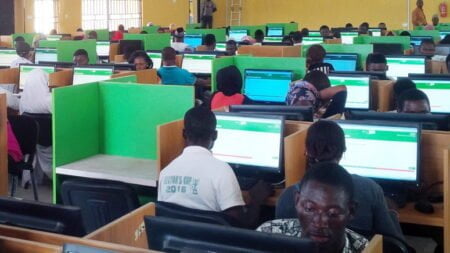 How to Correctly Answer NOUN e-Exam Questions – A guide